There many different types file formats which are used to store data, it can be text, sound and images. All computers systems have primary memory and secondary memory storage.  Computers can store information into different file formats. The most common are:

There are many different file formats such as:

MIDI is a type of a file format which allows storage for music. MIDI files usually compresses the music files, which means the quality is lower than MP3 files. They are usually compressed by 90%. The reason normal people don’t realize the difference is because it gets rid of the sound the ear cant hear and if one tone is higher than the other, the lower tone gets deducted.  MIDI uses 8-bit serial transmission (one bit at a time, over a single wire/channel), which is therefore asynchronous (not occurring at the same time).MIDI contains 16 channels from 0-15.  The pitch byte in MIDI detects the key/note/string and how it has been stung/pressed. The velocity byte detects pressure/how loud a keynote/string should be played. MIDI files are saved in .mid.

MPEG-3 (MP3) are music files. They use audio compression making music in MP3 format.  They reduce the file size by 90%.  The CD files use file compression, and the music is usually at satisfactory level.  MP3 files use a a format called lossy format which means that during the reduction, some parts of the files are lost so they cant be put back together.  The quality can differ due to the bits per second, usually 200 or more gives you a satisfactory level of sound, which is similar to to CD’s.

MPEG-4 (MP4) are used for multimedia, such as: videos, animations, music, photos etc. MP4 can be streamed over the internet without losing any real discernable quality.

JPEG is a file type which stores images.  The images are made up of tiny pixels, and the better the pixels the better the resolution of the image. Each color has a hexadecimal value.

Memory sizes can differ to different applications, there can be functions that take up more space than usual.

If a text file uses 1,000,000 characters and there are words that repeat themselves, using a Data Dictionary  will decrease the file size. The words which are common are replaced with numbers.

Lossless File Compression, all the data bits from the original file are reconstructed when the file is again uncompressed. This is particularly important for files where loss of any data would be disastrous – for example, a spread sheet file.

We use ASCII in our daily lives since binary is nearly impossible to read. The ASCII table is easy to understand and saves a lot of time.

Memory and storage devices can be split up into 3 distinct groups: 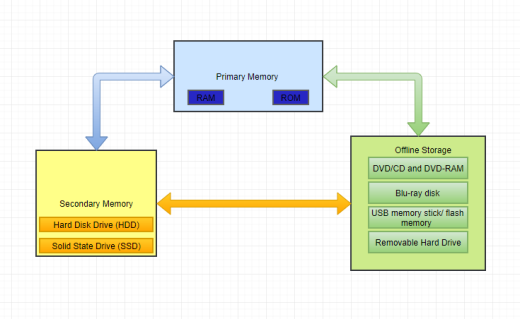 The larger the RAM size, the faster the device will run since it can handle the things at once. The RAM never runs out of memory, it just gets slower and slower. RAM is much faster to write to or read from than other types of memory, but its main drawback is its volatility.

There are currently 2 types of RAM technology:

Each Dynamic RAM chip consists of a number if transistors and capacitors. Each of these parts is tiny since a single RAM can contain millions of these chips. The functions are:

This type of RAM has to be constantly refreshed, about every 15 microseconds otherwise it will lose its value, the capacitors charge would leak away leaving every capacitor with the value of 0.

SRAMs don’t need to be constantly, as it is much faster than the DRAM when it comes to data access. Even though DRAM is the most common use of memory storage, SRAM is usually chosen over because of its speed. 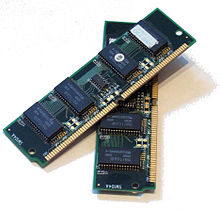 HDD is the most common method of storing data on a device.  Data is stored in a digital format on the magnetic surfaces of the disks (or platters).  The HDD has has a number of platters which can spin at about 7000 times a second. Several read-write heads are used  so that all the surfaces can be accessed; data is stored in sectors and tracks in blocks. Access to this data is lower than the RAM. Many applications require the read-write heads to move in and move out several times to get to the right data blocks. This is called latency – the time taken for a specific block of data on a track to rotate around to the read-write head.

SSD’s have no moving parts, therefore all the data is retrieved at the same rate and there is no use of latency.  Most SSD’s use NAND chips to control the movement of data.

SSD’s also  use EEPROM technology (Electronically Erasable Programmable Read Only Memory). This mainly uses NOR chips rather than NAND.

SSD’s are beneficial since:

CDs and DVDs use a red laser light to write and read the data. Each disk has a single spiral track that runs from the center to the outer edge. They can either be written once then read only once or can be written to and read several times. DVDS can hold more data than CDs due to dual layering technology (the disks have 2 individual recording layers.

A blue laser is used rather than a red laser, is used to carry out read and write operations; the wavelength of blue light is only 405 nano metre compared to red light which is 605 nano meters.

Blu-ray uses only one layer which means that it is safe from birefringence (light is refracted into two separate beams causing reading errors). DVD’s tend to have a lot of these errors

Colors are either represented by RGB (Red, Green and Blue) or by CMYK (Cyan, Magenta, Yellow and Black)

This is a text widget. The Text Widget allows you to add text or HTML to your sidebar. You can use a text widget to display text, links, images, HTML, or a combination of these. Edit them in the Widget section of the Customizer.
%d bloggers like this: